River Run Park (RRP) is a free whitewater park that proves that low flow rivers like the S. Platte can produce fun surfable waves. It might not be a Glenwood Springs wave but the three surfable waves at RRP are a blast and have quickly grown the river surfing scene in Metro Denver. There are six drops but only three surfable waves that two are adjustable real time and one that is adjusted as needed off season. RRP is minutes south of Denver.

RRP starts producing surfable waves at 80 CFS +/- and can handle over a thousand cfs on one of the waves. Best flow to surf are as follows. "CHICLETS WAVE": First RRP drop located next to the pedestrian bridge at the main park area, named after blocks that look like chiclets gum from above on the bridge. Chiclets comes in at about 80cfs and can handle up to about 350cfs. Is a good beginners wave. This is not an adjustable wave. "BENIHANA'S WAVE": 2nd RRP wave going up stream and is named after Ben Nielsen, the main design engineer for RRP, and for the famous skateboard trick of the same name. This wave is a 'WaveShapper' and is adjusted realtime to make the wave more surfable with 3 hydraulic flaps. Wave comes in at 180cfs (surfable indicator is the water reaching the bottom of the metal signs on the sides of the wave) but is only really adjusted when flow is 200cfs. The wave's top end of flow is unknown but has been surfed at over 1,200cfs. Benihana's is a novice wave to expert wave. Learn Chiclets or Wave Sixx first and hit Benni's. "WAVE SIXX": Is the sixth wave counting drops going up stream from Chiclets. It is about a 10 minute walk up the bike path (watch out for cyclists) and is at the solar panel that operates the 'WaveShaper' adjustable flap. Sixx can be surfed at insanely low flows but really comes in at 120cfs and the upper flow end has not been reached yet as it hit well over 500cfs in 2021 and was still surfable. Starting in 2021, the wave was proven to be safe to be left unattended to surf. So the wave is left shaped at all times and is adjusted periodically for the predominant flow of the day. Wave Sixx in essence increased the number of river surf days at RRP by twofold. Sixx is novice to expert wave but is also a great wave to learn on for newbies/beginners since you can sit on the edge and push into the wave. Be cool and thankful to the WaveShaper volunteers who take time from their day during the season to shape Benihanas and Sixx. NOTE: Late season 2022 the public web page for the pole cam at Sixx was revealed. It uploads still photos every 30 minutes but unfortunately operates only on weekdays from 9am to 4:30PM (does not operate on weekends). We are trying to get the times extended for the pole cam. Click on the "hamburger", the three lines on the upper left of the picture, to zoom in and scroll to prior days. Here is the web page: https://www.senserasystems.com/public/embed/M68780014670 MORE INFO AT http://endlesswaves.net/waves/river-run-park/

Disclaimer: Snoflo assumes no responsibility for errors or omissions in any of the content found here. You, the user assumes the entire risk associated with use of this data and content. terms of service 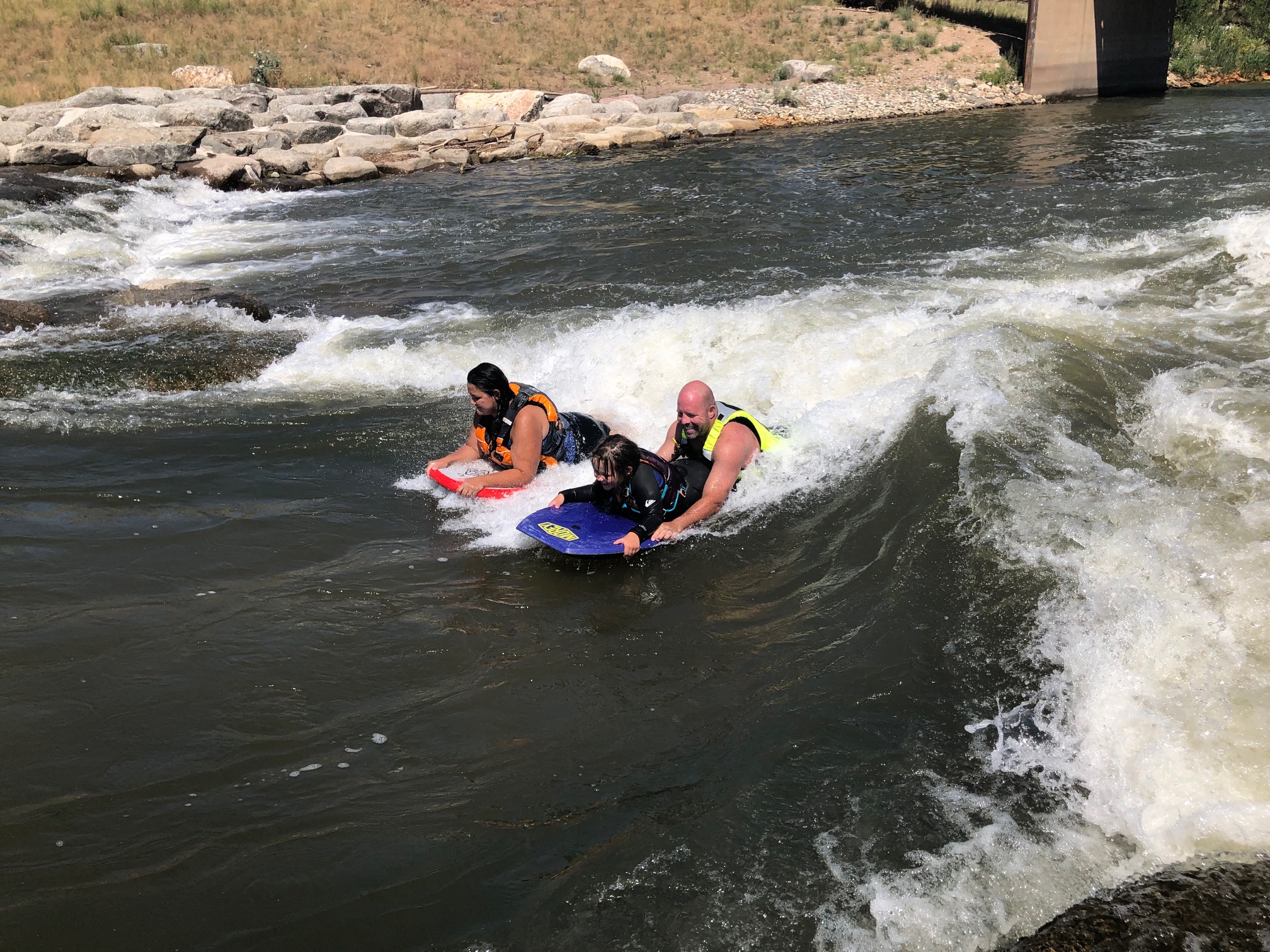 Thomas family showing how a family truly "stays together when they surf together"... 2019 was a stellar water flow season and Chiclets wave proved to be a good wave to surf. 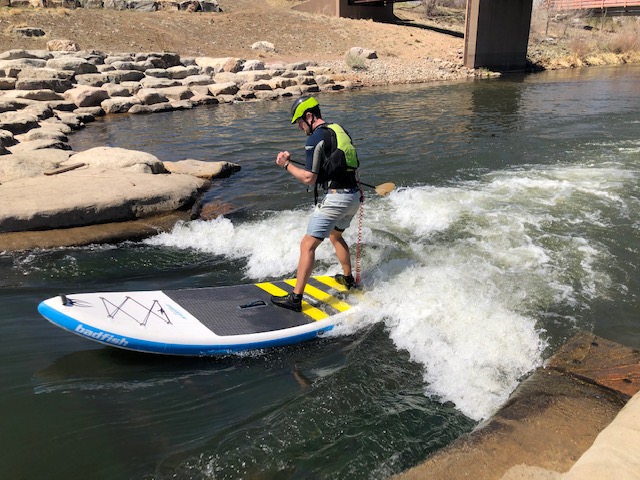 April 10th, 2021 Chiclets being surfed on a high volume board and shorty wetsuit. Probably better to have a full suit at the least... Also the bathrooms at RRP have been re-opened! Season is about to get going!!! 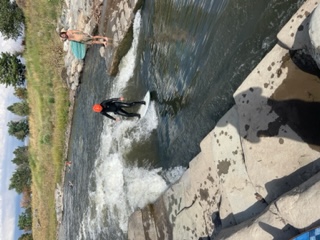 The Union gauge is wrong, reporting too low. Chiclets and Sixx are surfable. Sixx was shaped late Friday evening. Chatfield going up to 140cfs release on Saturday, higher flow should hit mid to late afternoon... Get it surfers! 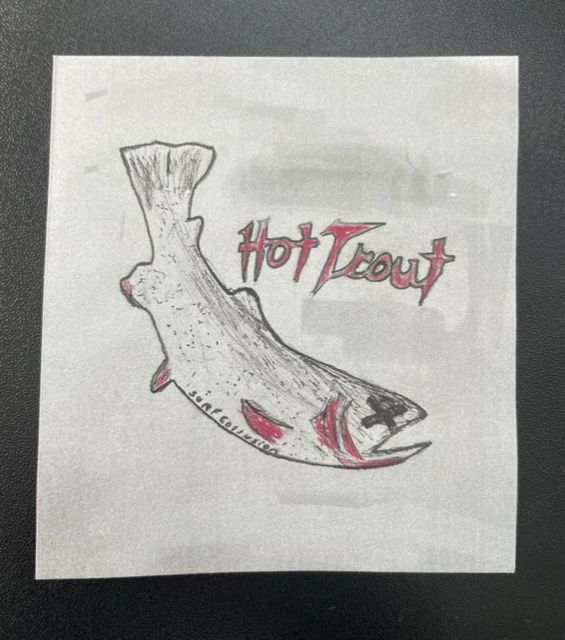 Unfortunately the Chatfield Dam release went down to 10cfs. Nobody knows how long or why. Can only hope the flow comes back with a resurgence of the monsoon rains... Maybe in the future, us river surfers will get a say on how and when the S. Platte River gets water, much as the Arkansas River does with a Voluntary Flow Management Program (VFMP) that enhances environmental and recreational flow much more advantageously than before their VFMP. 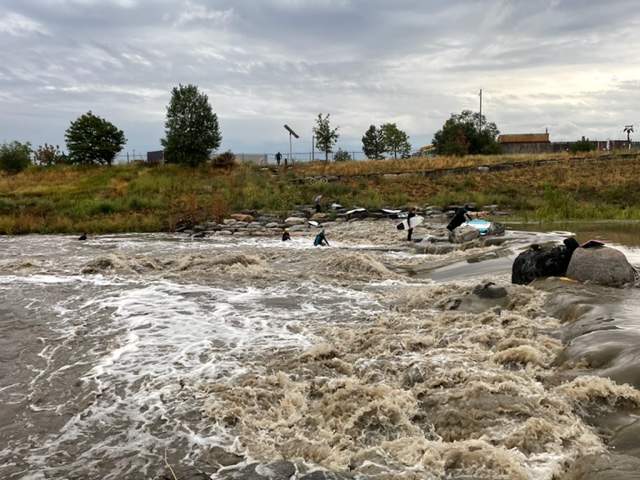 Monday evening, RRP Wave Sixx was going off at pushing 600cfs due to rain events south and at RRP. Very fun surf!.... Update for Tuesday 8/16/2022: Chatfield release went up to 200cfs. Adam will be shaping Beni's and Sixx but the rain may cause some changing conditions. Water is warm but the rain and air temp is cold so wear a warm wetsuit and mind how chilled you are getting and surf with a heads-up for large branches coming down river! Check the Sixx Cam today up to 4:30PM and starting 9am Wednesday, though dawn patrol Wednesday should be good as well with the morning flows still at 200ish. https://www.senserasystems.com/public/embed/M68780014670

Explore river levels for 1000+ tributaries and waterways across the nation

Reservoirs are crucial to the nations water supply and conservation planning.